Boiler cleaning is one of our core competencies here at Thompson Industrial Services. Our teams clean a vast spectrum of these units, from Super Critical design to basic industrial boilers as well as BOP (balance of plant) equipment on a regular basis, so it’s not too often that we come across a boiler water blasting job that makes us scratch our heads a bit. But that’s just what happened recently when a major power plant in Virginia came to us and told us about their cleaning need. Here’s the full story of this exceptionally difficult boiler cleaning job and how our great team of engineers and technicians completed it successfully. 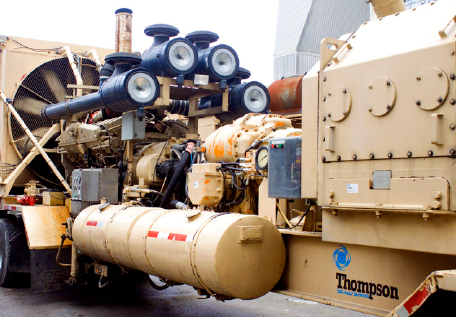 A Long Overdue Cleaning
Because boilers can be so challenging to clean and/or require excessive outage time, facilities often let them go a little longer than they probably should between cleanings. We were a little surprised, though, to find out that because of the extreme restrictions of the plant’s “zero waste discharge” environmental permit, the two utility boilers we would be water blasting had not been thoroughly cleaned since they were installed…in the 1970s! This would certainly be an involved job, requiring specialized hydroblasters, support equipment and ingenuity to remove decades’ worth of debris inside the boilers. As usual, the facility was interested in having this cleaning completed as quickly as possible to minimize downtime, which in this case gave our team just one weekend in which to do the job.
The Twist
This boiler cleaning job would have been tricky enough, but the power plant manager had a twist—an added requirement that would put a whole new spin on the project. Due to contamination concerns, the waste water and debris created inside the boilers during the water blasting process could not be allowed to make its way into the plant’s normal runoff systems. Instead, our team would have to capture, retain, and dispose of every drop of water and particle of debris removed from the two boilers. To accomplish this, we pulled in experts from our different offices within Thompson Industrial Services and came up with a creative plan.
Preparing the Job Site
To capture all of the water and waste from the water blasting, the team had to anticipate with certainty where the runoff would occur while the cleaning was underway. They identified the three runoff points, built a temporary system for capturing the water, and covered the surrounding areas with tarps and 40 large sheets of plywood to avoid contamination in the event of an accidental leak excursion. We set up two separate areas for vacuuming the water and debris into our storage trucks—two separate areas because the final stipulation for the cleaning was that the waste from each of the two boilers had to be kept separate from the other. The plant wanted us to analyze the chemical content of each boiler’s waste water, so the waste could not be combined as it was removed.
Let the Water Blasting Begin
On a Friday evening, all of the equipment and precautions were in place and our team began water blasting the boilers. Thanks to an incredible team effort by a lot of incredible Thompson Industrial Services’ employees, everything went according to plan and our equipment rolled off the job site just as the sun was coming up on Sunday morning. Our clients breathed a sigh of relief and expressed to us how impressed they were with our team’s performance from beginning to end. They had come to us with a job that seemed impossible due to its strict stipulations and tight time frame, but our team had tackled it enthusiastically and finished it according to expectations and on schedule.
“We recently presented Thompson with a tough challenge we needed solved quickly.  Our boilers hadn’t been cleaned in many years because we thought it was impossible within our zero-discharge constraints. Thompson not only engineered a safe and successful solution, but they were able to turn it around in record time. We knew we were in good hands turning this important project over to Thompson, and we couldn’t be happier with the results.” – Operations Manager, VA Power Plant
Looking to the Future
It’s not our way at Thompson Industrial Services to be complacent with a job well done when we know that there is a possibility we could improve on it. The power plant in Virginia has decided to have us clean their boilers much more frequently in the future, and now that we have done the job once, our experts are at work to customize the next cleaning using automation to further improve safety, precision and efficiency.
If you have a water blasting, safe excavation, or cleaning task that you have been avoiding because it seems impossible, we hope that this story inspires you to give us a call! These kinds of tough projects are our specialty, and we have the custom solutions required to get them done on time and on budget.
Back